COVID-19 and Clinical Trials: Methods Report of the Medidata Perspective

Methods Report of the Medidata Perspective

This Medidata Institute report provides a technical summary of the methodologies performed as part of our COVID-19 and Clinical Trials: The Medidata Perspective. As COVID-19 has spread, Medidata has been monitoring its global impact on clinical trials. We see the profound impact on our industry, both at a global and site level. As COVID-19 continues to spread and countries restrict movement, delays are being seen in the start of new studies, as well as in enrollments in ongoing studies, and patients already enrolled are facing challenges keeping their scheduled visits.

Analyses for The Medidata Perspective Releases 1.0-3.0 were performed across approximately 4,600 clinical trials and 182,000 study sites from Medidata’s clinical data repository with added curation steps to exclude both non-recruiting studies and sites for enrollment related analyses. Performance analytics show standardized views of subject accrual and data entry across geographies and therapeutic areas to monitor and respond to COVID-19 impact, giving an overall view of the temporal aspect of how the industry has progressed. These analyses applied descriptive statistics to summarize the overall dataset, as well as each point in time, and to test the variability of each of the summary measures. Confidence bounds around summary measures are provided to show the statistical significance of the observed difference in the summary measures at different points in time.

The Medidata Perspective Release 1.0: Medidata’s March 23, 2020 data and impact report performed an analysis of the change in new patients entering clinical trials for 4,069 actively recruiting studies between 2017-2020. In China and the US, Exhibit 1A and Exhibit 1B  show a YoY decrease of 83% and 62%, respectively, in new patients entering trials per study site in March 2020 compared to March 2019, and these declines are statistically significant at a 95% confidence level. This report includes data up to mid-March.

Similar YoY declines were observed across the EU, including France and Italy in Exhibit 1A. These trends are not seen in earlier months, or prior to the COVID-19 outbreak, and demonstrate the significance of the pandemic’s impact on cities, regions, and countries with increasingly tighter laws and guidelines restricting movement by anyone outside of the home. 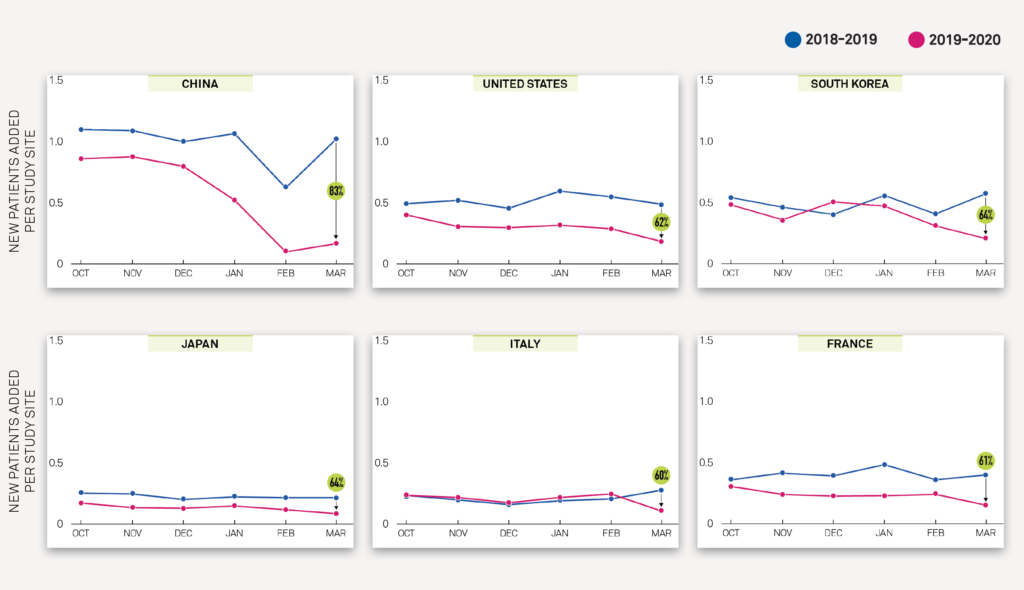 The Medidata Perspective Release 2.0: Medidata’s April 3, 2020 data and impact report includes analyses on impact on trial enrollment, shown in Exhibit 2A across all therapeutic areas (TA) and Exhibit 2B by TA across 4,599 studies and 182,321 study sites. This report includes data for the full month of March.

The global data shows a statistically significant decrease of 65%, at a 95% confidence level, in the average number of new patients entering trials per study-site YoY during March. Most geographic regions have been heavily impacted. All of the countries analyzed experienced accelerated decreases in new patients entering trials YoY, except two. For example, during March there were enrollment decreases YoY for the US (67%), France (68%), Italy (52%), Germany (32%), Spain (68%), UK (80%), Japan (43%), India (84%), and South Korea (61%). The two countries that improved between February and March were Argentina and China. 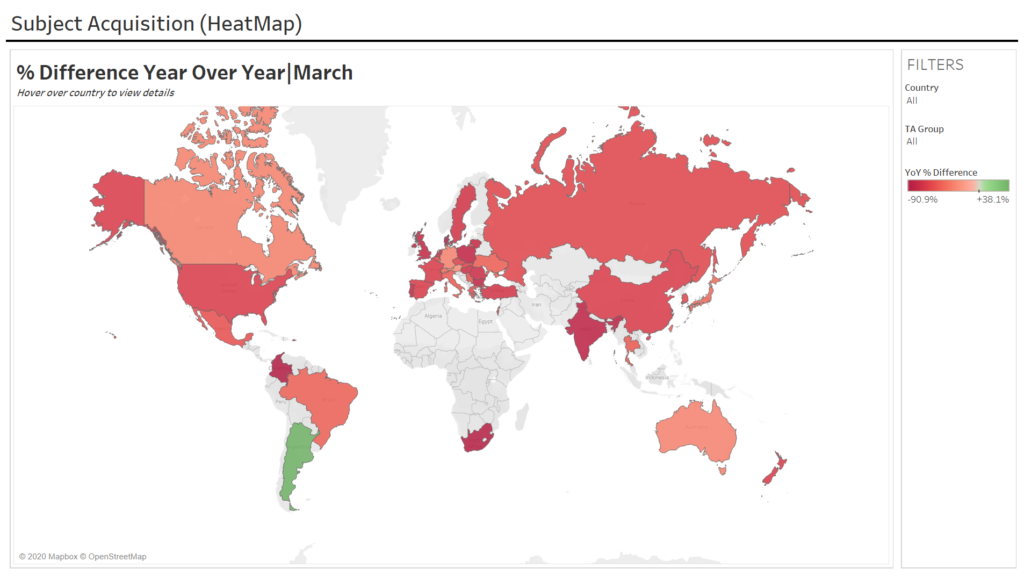 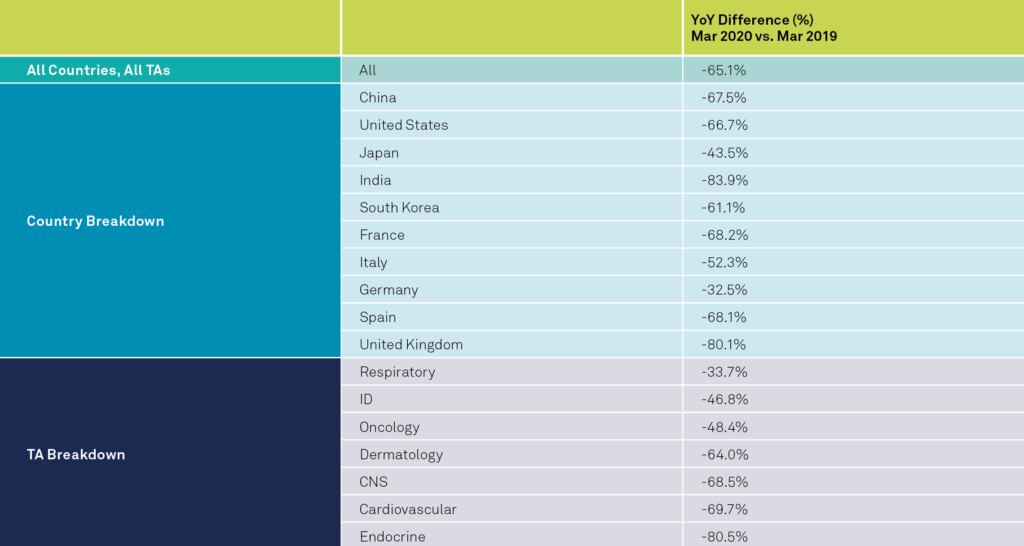 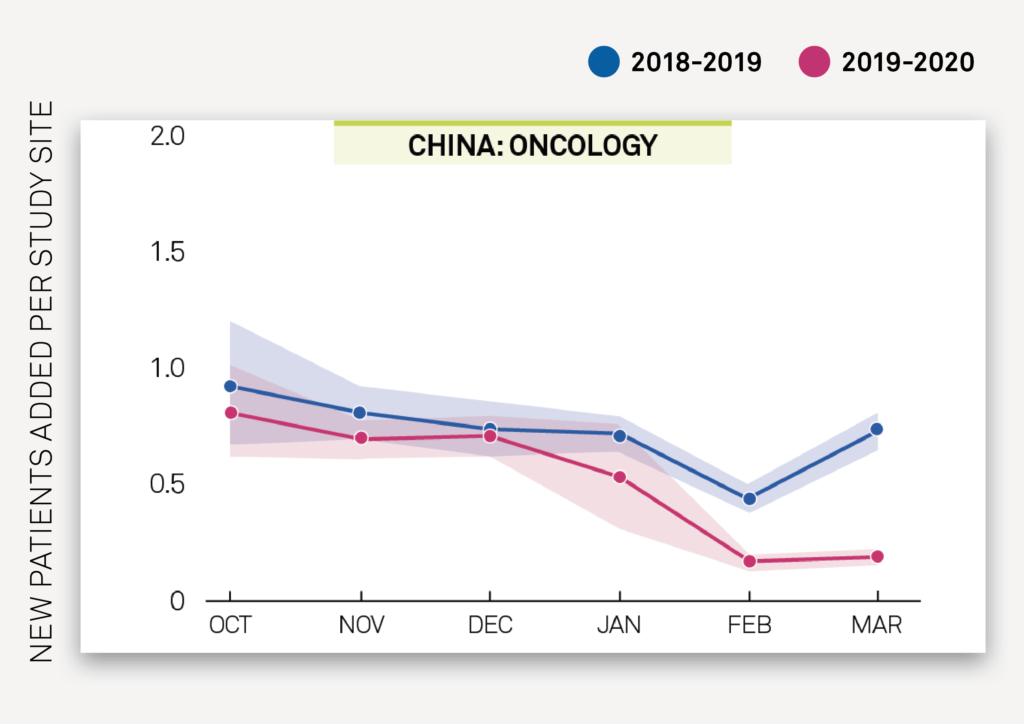 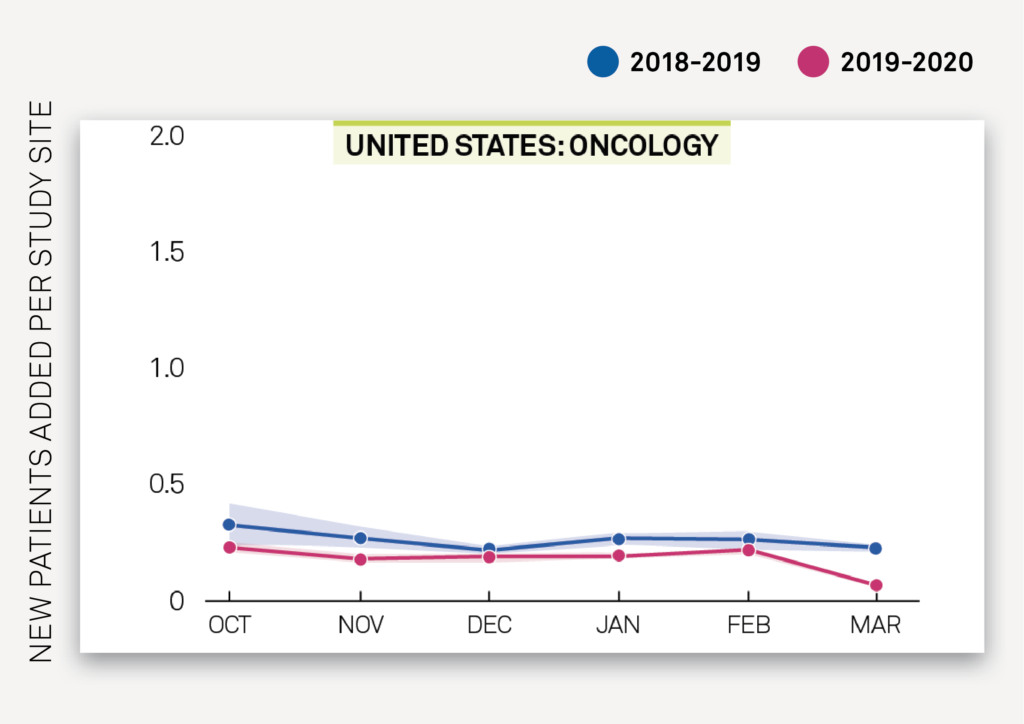 The Medidata Perspective Release 3.0: Medidata’s April 17, 2020 data and impact report performed an analysis on the global impact of the virus across 4,600 studies and 182,227 study sites with added results for the first two weeks of April, as seen in Exhibit 3 across all therapeutic areas (TA) compared to March. April data calculations were adjusted to the first two weeks of the month.

The global data shows a statistically significant decrease of 75%, at a 95% confidence level, in the average number of new patients entering trials per study-site for the first two weeks of April compared to the same time frame last year. This compares to a 65% decrease we saw in the month of March. The data clearly indicate that the impact of the pandemic on patient enrollment in most countries continues to grow. As the majority of countries’ patient enrollment continues to drop with larger YoY differences, China, South Korea and Italy are seeing a decrease in impact. For example, China’s YoY drop in April 2019-April 2020 is -39% compared to -68% in March 2019-2020. 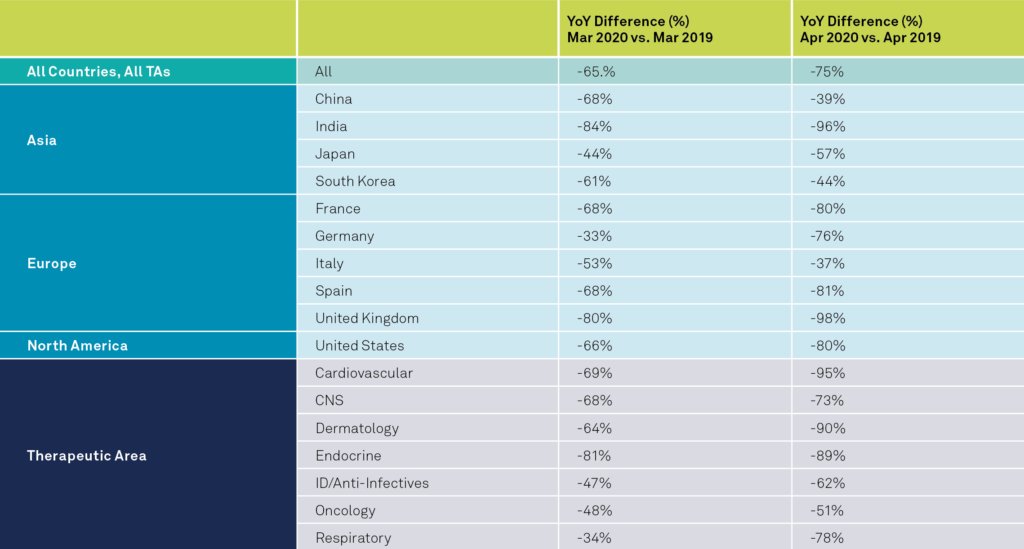 By comparing average subject accruement at sites across time points and against the same time periods in previous years, we observe a statistically significant drop globally in recent months. These changes are particularly noted during points of time around the COVID-19 outbreak in each country. China’s drop in trial operations is topical given the seasonal impact observed around the Lunar New Year, but the drop is more prominent in 2020 since the COVID-19 outbreak. The decrease in trial enrollment seen in China in February 2020 are similar to those seen in the US in March 2020. There is a preponderance of trial drop-off seen in January-March 2020 in both China and the US, especially in oncology. In addition, as shown in Exhibit 3, other therapeutic areas’ trials are noted to have an even steeper drop-off compared to oncology trials, especially in the recent weeks in April.

Sharing these data analyses and industry insights are key in understanding COVID-19’s impact on a global level in order to fuel public health action. Medidata will continue to monitor the impact of the virus on clinical studies, identify markers of recovery and provide updated information as available.